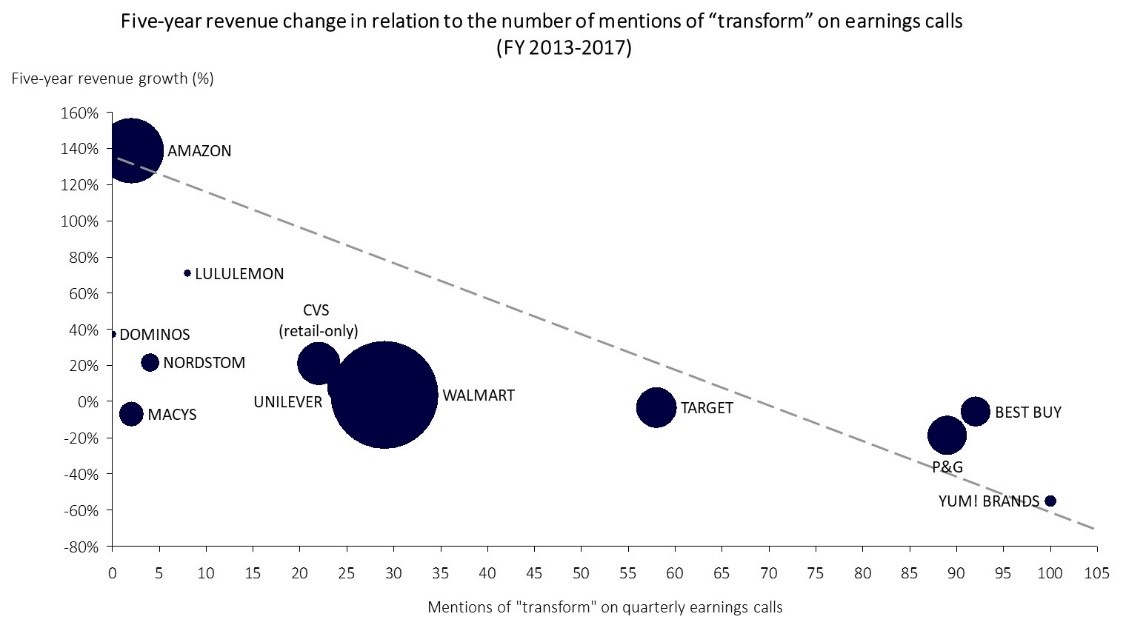 In recent years, companies in the retail and consumer goods space have touted “business transformations” – a cue to analysts and Wall Street that they were launching innovative products and services or becoming more digital, to name a few themes. To understand the success rate of transformations in the retail and consumer good markets, The Navio Group partnered with Loup Ventures to identify a basket of companies and analyze key performance metrics over the last five years.

The results were surprising: companies that frequently touted a transformation on their earnings calls were less likely to succeed in driving long-term revenue lifts and generating growth.

More often, companies with executives that were eager to publicize transformation efforts were either a) unsuccessful driving top-line and bottom-line improvements or b) only succeeded in cost-cutting to improve margins, despite stagnant or declining revenue. In effect, transformations touted by executives at these companies resulted in operational restructuring.

One notable exception stood out amongst the list of companies: Domino’s. Between 2013 and 2017, its executives never mentioned a transformation and instead took a workmanlike approach to change their company to drive outsized results. Domino’s drove a staggering 30% revenue growth and increased its operating income by more than 40% over the five-year period.

We believe the genesis can be traced back to the CEO, Patrick Doyle’s, early declaration on Jim Cramer’s show that “Our pizza tastes worse than the box…I’m gonna tell people.” Rather than dust off the traditional turnaround playbook, the management team came out and exposed the underlying, widely known issue– the product. As Doyle told CBS, “We went on air on a Monday, and by Wednesday, our sales were up double digit. And we hadn’t even told them how we’d fixed it.” The leadership team and organization focused on fixing the product and, in doing so, reinvigorated the brand. It then focused on enhancing customer experience through the facilitation of convenience by turning itself into a technology-focused company. The results speak for themselves as the company’s stock outperformed traditional high-achievers Amazon, Apple, and Facebook over a seven-year period.

So, what can we conclude from the data and from Domino’s success?  Three themes stick out:

It requires significant organizational introspection, courage, honesty, design thinking and research. There is no off-the-shelf solution, no app and no magic to it – just the willingness to reinvent, reimagine and risk the occasional screw up. Think of it this way; if it’s not risky, it’s probably not innovative.

As change becomes the norm in the retail and consumer goods industry – as well as most others – executives and leaders will need to re-think what it means to transform their businesses rather than, as Barack Obama once said of his opposition, “wrapping an old fish in a piece of paper called change.” Leaders should ask themselves: what are the underlying issues? And how do we take a non-linear approach or exponential mindset to transforming the business, even if it disrupts our current model?